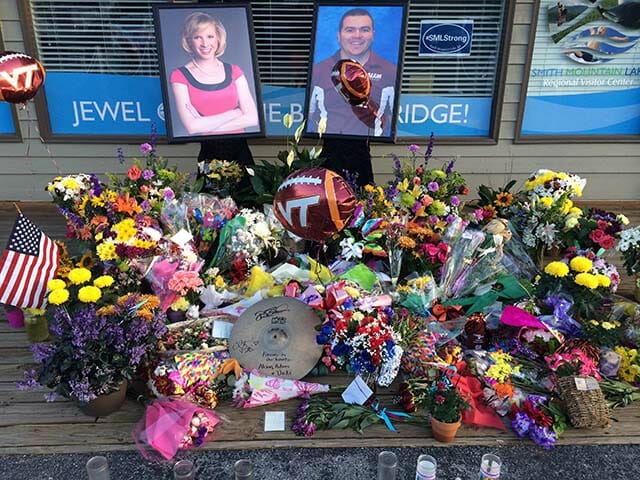 The news media is always interested in workplace violence. Mass shootings get wall-to-wall coverage for days on end and terms like “going postal” get coined.  On August 26th, the two collided in an unspeakable tragedy as Alison Parker and Adam Ward were executed on live TV by Vester Lee Flanagan, a former co-worker who had been fired by the station.

Normally, I would have blogged about this story right away holding it up as a blatant example of why pre-employment background checks and reference verifications are so important. But I couldn’t even think about writing about this until now. The reason is… I am Alison Parker.  Every time I see her picture, I see my face.

For the majority of my 20 years in local TV news, I was the one standing out there doing live shot after live shot. As I watched the video of the shooting I relived the thousands of live shots- just like that one- I had done over the years. That morning, Alison and Adam were having my favorite kind of day. You come into the station at 3:30am wondering if you are going to be sent out to cover a crime, a fire or to rehash something that had happened 8 hours ago while you were desperately trying to squeeze in a little sleep. You get your assignment… a happy story about a waterpark with live interviews to keep it fresh! The weather is perfect… not too hot and muggy… not freezing cold. Then the sun starts creeping up.  As you watch the day start and you think, “We are the luckiest people in the world. We get paid to do this!” Sure we have all looked over our shoulders feeling like targets at times. There were plenty of days that my photographer sent me to sit in the live truck while he finished breaking down because he felt the situation was dicey. But for the most part, the feeling of doing a live shot, for me at least, was pure joy.

After the killings, Flanagan, who went by the name Bryce Williams on the air, started tweeting messages about coworkers complaining about him to HR and about a case he filed with the EEOC. WDBJ’s station manager later came said they had performed background and reference checks and everything came back clean. I asked a former colleague of mine about her time working with him years ago in Savannah, Georgia. As you can imagine, several members of that newsroom spoke after the shooter’s identity was revealed, and none of them remember any bullying, threats or signs of trouble.

Things started to change when Flanagan moved to a station in Tallahassee, Florida. Former coworkers there say he never socialized with the crew and never became friends with anyone in the newsroom. They also say he couldn’t laugh at his mistakes- something that happens to everyone who has ever been in front of the camera. Instead, they say, he would become enraged.  In November of 2000 Flanagan filed a federal lawsuit against the station for racial discrimination.

As with every profession, TV news draws all kinds. There is a lot of pressure from bosses, pressure from the viewers and sometimes just mean people. To be honest, I worked with several people over the years who made me cry.  But how do you know when you are dealing with something more? Are you working with a bully? Could it turn into a dangerous situation? The answers are so hard to come by.

EBI and the Screening News Network plan to put a spotlight on the issue of workplace violence and bullying. In the coming months we will be partnering with Catherine Mattice, the owner of Civility Partners, a consulting firm dedicated to eradicating workplace bullying. We will help you learn to identify workplace bullying and give you practical steps to stop.  Hopefully together, we can help prevent another tragedy like the one caught on live TV.