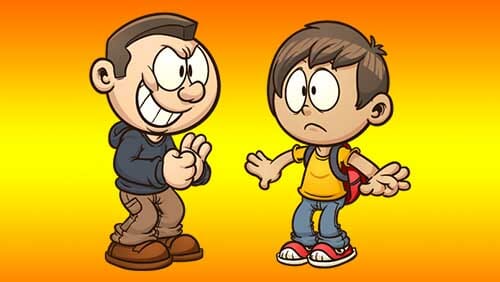 You already know that bullying happens among children and teens in schools. The real unknown is how to stop it. According to NoBully.org, bullying and cyberbullying happen in four main ways – often repeatedly and in combination:

I’ve been working with NoBully.org for awhile now because we both believe in solving bullying through culture change. Unfortunately culture change requires a whole lot of work and a whole lot of budget, and schools don’t generally have a bunch of money laying around for a major culture shift.

That means it’s up to parents to teach kids how to handle the bullying, and to also ensure their kids don’t become bullies themselves. Kids need to learn social and emotional intelligence – a skill not taught in schools. Kids who are still learning to manage their emotions (heck, many of us adults are learning to manage our emotions!) often bully because they don’t know how else to act out how they feel. Kids are also still figuring out where they sit on the social ladder, and may bully in order to test their boundaries or push themselves up the ladder.

Unfortunately, research has found that kids and teens who bully often bully as adults, and kids and teens who are targeted become lifelong targets. Unfortunately targets learn to be helpless, and this learned behavior never goes away. This research has played out for me as I have received phone calls from adults who complain that they have been bullied at their last three or four jobs.

In the end, it is up to targets to learn to stand up for themselves. But kids need their parents to teach them, and the story of parents who aren’t around because they’re working two jobs, for example, is all too familiar. Without parents around, it’s up to the bystanders to help the target.

Enter the Bystander Revolution, a nonprofit organization hoping to empower kids and teens to stop bullying. October was Bullying Prevention Month, and for all 31 days in October the organization rolled out daily challenges, each centered around one simple act that can help defuse bullying and shift the culture.

Monica Lewinsky supported the project and served as an ambassador. Monica recently popped back up in the media for her TED Talk on shaming and cyberbullying, describing herself as “patient zero” of the cyberbullying epidemic.

Over the last few months we have been discussing the prevalence of bullies in the workplace. We’ve talked about identifying […]