Laws and technology meant to improve the screening process are facing scrutiny after questionable results. And an opioid-heiress faces Fashion Week backlash (of all things!). This week’s EBI Screening News Network presented by Jennifer Gladstone has a little bit of everything.

We all know the opioid crisis is far-reaching, but did you know it’s even hitting the Big Apple runway? Joss Sackler’s New York Fashion Week debut fell flat after a report about her connection to the opioid crisis. Sackler is married to an heir of the family under fire for owning Purdue Pharma, the maker of OxyContin. Purdue recently filed for bankruptcy, the first step toward setting thousands of lawsuits from cities and counties across the country worth $10-$12 billion. Opioid overdoses account for hundreds of thousands overdose deaths in America since 1996.

High-profile guests turned down invitations to attend Sackler’s show, including recovering addict Courtney Love, whose husband, Kurt Cobain, died from a heroin overdose. Sackler defended her decision to showcase her designs at NYFW, writing on Facebook: “What you accomplished… was to relegate my identity to only being someone’s wife.”

As part of the settlement, Purdue will effectively dissolve, but a new company will form in its place and continue to sell OxyContin. Revenue from those sales will go to plaintiffs in the settlement.

However, a synthetic opioid, fentanyl, could continue the epidemic. It is more potent and cheaper than heroin and has yet to spread heavily into the western United States. A report by RAND argues more innovation is necessary to combat opioid addiction. This could include more pre-employment drug testing and rolling drug screening after employment. The Society for Human Resource Management (SHRM) reports only about 4% of employers conduct continuous checks. EBI offers an Intercept Oral Fluid Drug Test. This is an excellent choice for pre-employment, random, rolling, and post-accident testing.

Ban the Box laws are designed to level the hiring playing field for people with criminal histories, but recent research shows the laws may be decreasing employment for some men who don’t have criminal records.

Why? How? The Brookings Institution calls it a “classic case of unintended consequences.” Ban the Box laws prevent employers from asking about a person’s criminal history on a job application. Employers can ask later, but the idea behind Ban the Box is to open the door to all applicants from the outset, instead of culling the field with a potentially discriminatory question. Research shows employers hesitate to hire people with criminal records. However, two studies have found these laws are replacing one form of discrimination with another.

Studies from Texas A&M University and the University of Oregon show a drop in employment rates among African American and Hispanic men aged 25 to 34. Researchers believe employers shy away from these applicants because they have perceived biases these groups are more likely to have criminal records. Since the law stops employers from asking about an applicant’s criminal history, they are passing over qualified applicants who don’t have a criminal history because of unintentional “statistical discrimination”.

Employers are also struggling with the law’s unintended consequences, namely a longer time-to-hire rate and increased recruiting/onboarding costs if they find a disqualifying conviction late in the hiring process. The Professional Background Screening Association, an international accrediting organization for background screeners, says Ban the Box needs to be studied further.

“PBSA believes steps must be taken to help re-integrate people who have a criminal history back into society and we support the intent of “Ban the Box” legislation. In 2015, the White House echoed this sentiment with the “Fair Chance Pledge.” We remain concerned that the current framework of fragmented and varying legislation at the state and local levels is not ideal. And we are also concerned about recent studies that initially find greater racial discrimination in hiring after “Ban the Box” legislation.” –PBSA Policy Position

Colorado, Maine, North Dakota, and New Mexico adopted Ban the Box laws in 2019. Thirty-five states plus Washington, D.C. and 150 cities and counties have some version of the law. 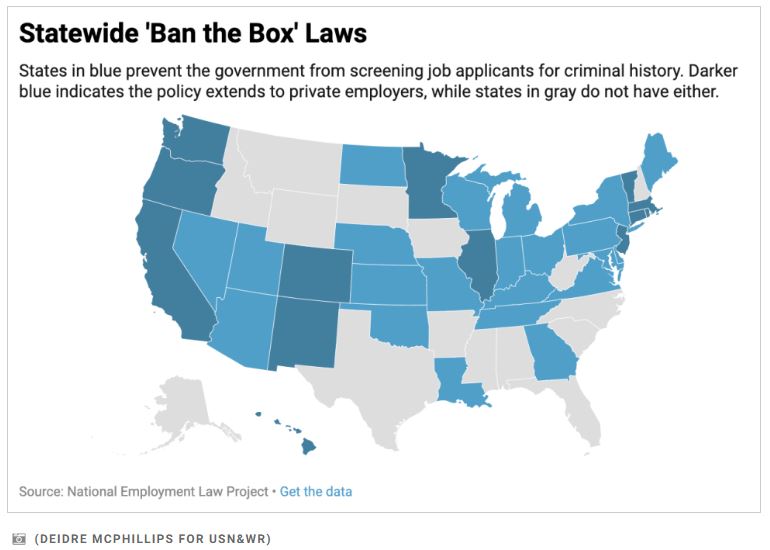 What do Australia, Canada, New Zealand, and Illinois, Michigan, and California have in common? They are all exploring roadside drug tests to detect people suspected of driving while high on marijuana. Results of these tests are sketchy, though, and are impacting how law enforcement both here and abroad can use them in court.

Australia introduced roadside drug testing in 2004 in Victoria; it is now used in all Australian states and territories. However, a study published in the journal Drug Testing and Analysis shows devices commonly used by police in Australia for traffic stops involving suspected pot smoking report false negatives up to 16% of the time.

“Imagine using a breathalyzer that 16% of the time didn’t detect that a driver was intoxicated, and 5% of the time pinged them if they were only at at .01 or .02.” –Iain McGregor, the academic director of the Lambert Initiative for Cannabinoid Therapeutics at Sydney University

That’s just one of the difficulties in using these oral saliva roadside tests during traffic stops. Toxicologists say cannabis is complex and made of multiple chemicals. It’s also unclear how long it stays in a person’s system. In one case, a man was proven innocent of drugged driving because his positive roadside test result was from marijuana he had smoked two days earlier. This inability to pinpoint impairment will continue to be an issue.

As state after state in the U.S. decriminalizes marijuana use in some way, law enforcement will continue to find ways to detect impairment during roadside stops. Until roadside saliva tests become more accurate, it is unlikely they will hold up in court.

Before You File: Is Your Tax Preparer a Crook?

A new bill has freelancers split over labor reform. The implications for employers could affect who and how you screen […]

April 6, 2021
Read it
Major League Baseball is Back – What Businesses Can Learn From Baseball’s Safety Measures