Candidates and employers alike are facing a variety of obstacles in today’s hiring landscape. From massive issues relating to drug use to lies, fibs, and fabrications among a slew of applicants, hiring managers need to adjust their recruiting processes on Friday the 13th and beyond.

This week’s EBI Screening News Weekly Wrap presented by Jennifer Gladstone shows us how we got here, and why background checks are more important than ever to maintain a safe workplace.

After a rough start, the Federal Motor Carrier Safety Administration (FMCSA) Commercial Driver’s License Drug and Alcohol Clearinghouse is picking up speed. Since January, more than 650,000 people have registered, and the Clearinghouse has identified nearly 8,000 positive drug tests. That means thousands of CDL holders put into the system failed a drug test or refused to be tested. These tests can be requested during pre-employment screening, randomly, or post-accident.

If a driver fails a pre-employment drug test while trying to get a new job, the employer must report it to the Clearinghouse. The driver is supposed to notify its current fleet, but that doesn’t always happen. Therefore, a driver could continue working while the employer is kept totally in the dark about the violation.

The regulation is supposed to help eliminate this loophole by requiring all FMCSA-regulated employers to conduct pre-employment background checks using the current process, and to query the Clearinghouse. The Clearinghouse identifies drivers who have violated federal drug and alcohol policies.

“The FMCSA Clearinghouse provides employers an additional resource to pull from to help reduce safety risks or even regulatory non-compliance. This is certainly a step in the right direction to help protect consumers using our vast U.S. roadways.” – Bob Capwell, Chief Knowledge Officer at EBI

Employers are encouraged to do a query on ALL their drivers at least once a year.

ICYMI: DOT drug testing is one of EBI’s Top 5 Background Screening Trends for 2020. Find out more about the impact of the FMCSA Clearinghouse on the transportation industry.

Attorneys representing the plaintiffs who are suing opioid manufacturers for billions of dollars think they’ve found the right prescription for a larger payout. But a bunch of state attorneys general are trying to crush the greedy plan.

But 36 state AG’s say some of the plaintiffs’ attorneys are trying to heap more profits onto their already high fees. The AG’s sent a letter to the U.S. District Court for the Northern District of Ohio asking the court to block the implementation of a “common benefit fund” that would impose a 7% fee on every penny recovered from the pharmaceutical companies. That fee is above and beyond their typical cut of the settlements. According to the bi-partisan coalition, this fund would only enrich the attorneys further while dramatically reducing the amount of money that will go to communities hard hit by the opioid crisis.

“Imposing a fee on all proceeds put into this fund solely for the benefit of a few attorneys would undermine federalism and dismantle the careful framework we created to ensure that victims of this epidemic receive the help they need and deserve.” – Ken Paxton, Attorney General of Texas

The Centers for Disease Control and Prevention reports that from 1999 to 2017, almost 218,000 people died in the United States from overdoses related to prescription opioids. The CDC also says opioid-related deaths were five times higher in 2017 than they were in 1999. If opioid drug abuse continues in the United States, EBI estimates significant growth in the drug screening industry. This growth is yet another reason to make sure drug testing is a part of your comprehensive background check policy.

Unfortunately, we know job applicants lie. But we are still surprised by a new survey showing why these charlatans are hired.

A new survey by reference checking company, Checkster, finds 78% of job applicants lie at some point during the hiring process, and 66% of hiring managers say they don’t care!

Checkster interviewed 400 applicants and 400 hiring managers and found people most often fib about their skills. Sixty percent of applicants claimed they had “mastered” certain skills when they really had basic knowledge.

“Including proper employment and education verifications in your background checks can go a long way to weeding out people willing to lie to get a job.” – Curt Schwall, Vice President of Compliance and Regulatory Affairs at EBI

Through the Looking Glass 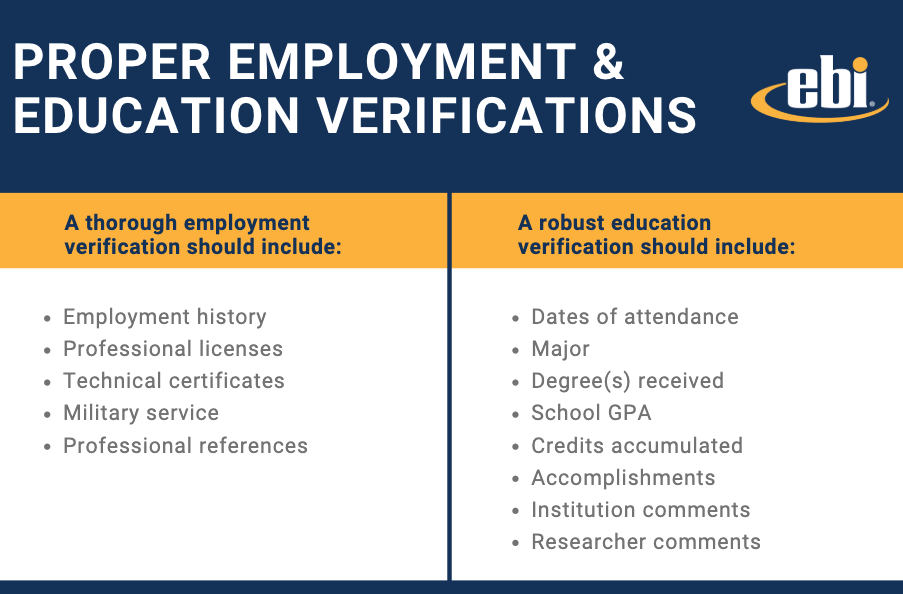 Hiring managers need to have a consistent protocol to follow when researching an applicant and in deciding how to respond if a lie is uncovered during the verification process.

A dedication to quality and compliance can make talent acquisition easier. Watch this video with Larry White, Chief Operating Officer and President of EBI, to see how.