Knowing what screening solutions to use for hiring is an important part of talent acquisition. However, government at the federal and state levels is getting increasingly involved with pre-employment decisions about technology like Artificial Intelligence and laws involving drug testing and criminal history. The result, as the EBI Screening News Weekly Wrap presented by Jennifer Gladstone shows us, can be a confusing landscape for employers to follow while legislators make up their minds.

The Electronic Privacy Information Center – also known as EPIC – is asking the government to pay attention to the growing use of Artificial Intelligence in pre-employment screening.

EPIC filed a petition with the Federal Trade Commission against a company that helps employers make hiring decisions by conducting video interviews and then running the recordings through an algorithm. EPIC is a research center that focuses on privacy issues.

EPIC’s complaint states the company’s use of facial recognition and biometric data “constitute unfair and deceptive trade practices” since applicants who want to work at companies that use the service have no choice but to agree to these practices.

However, Illinois has addressed the use of biometric data in its Illinois Biometric Privacy Act. The law requires any business that collects or obtains biometric data to first receive written consent from individuals before obtaining their biometric data. Businesses must also disclose their policies for usage and retention. This Illinois law allows private individuals to bring lawsuits and recover damages for violations.

76% of recruiters believe AI’s impact on recruiting will be at least somewhat significant.
– LinkedIn

The AI in question uses a collection of data points about a person including their voice and appearance and inputs them into predictive algorithms to asses employability. Similar AI technology can capture a candidate’s facial expressions and analyze that to determine personality traits.

A lawyer for EPIC says the petition “is the first formal effort to establish regulations for commercial AI use in the United States.” EPIC says it is concerned businesses are not disclosing to applicants they are using AI as a decision-making tool, and they are not being straightforward about how they apply the data.

Such data is also being used for everything from ranking tennis players to evaluating potential AirBnB guests.

EBI uses AI as part of our real-time data validation for our Form I-9 service. This is a cost-saving tool that also eliminates human error by scanning document fields and identifying areas that may be out of compliance. This is a simple, straightforward way to incorporate the benefits of AI technology, without compromising any data security or privacy efforts.

AI can be confusing and, yes, even scary. We’re sure you have some questions about how this technology affects background checks. Submit them to EBI’s “Ask The Expert” and we may feature your query in an upcoming segment. 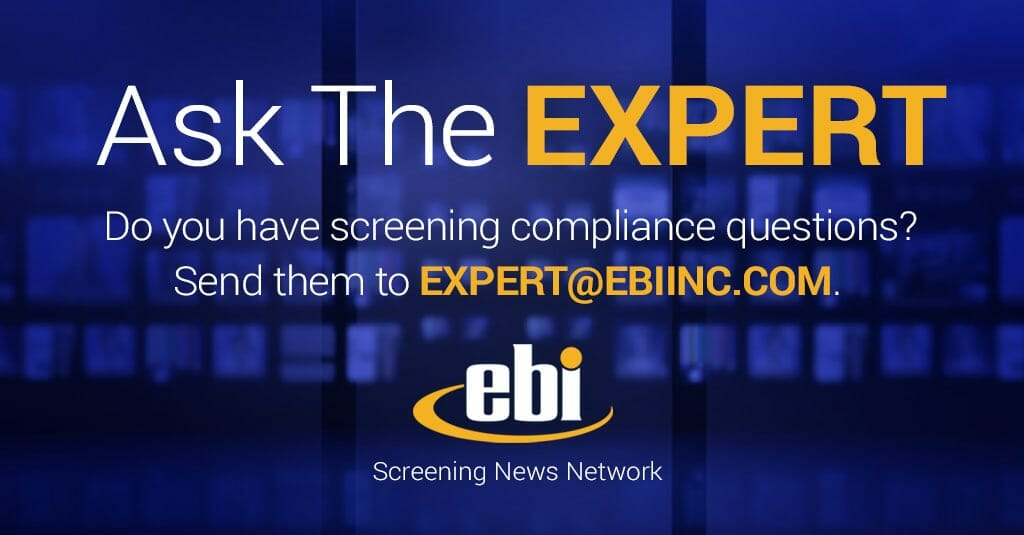 In just a few months, pre-employment marijuana screening will be outlawed for most employers in New York City.

The new law, which goes into effect May 10th, makes mandatory pot testing a “discriminatory practice” akin to denying employment based on race, gender, and other protected characteristics.

There is a long list of exceptions for which the new law does not apply:

This law does not apply to positions with state or federal drug testing mandates attached to them.

As reported in Screening News Network, at the start of 2020, Nevada became the first state to officially ban most pre-employment marijuana screening. Similar laws are expected to appear in more municipalities and states in coming years. This does not mean employers should stop striving to create a drug-free workplace. In fact, most of these laws allow employers to require drug testing for weed once someone is employed.

Contact us if you need assistance reviewing your drug screening policy to make sure you remain in compliance.

ICYMI: How does your screening firm define quality? EBI uses five measurable pillars to ensure you always get more than expected. Click here to find out how our commitment to quality benefits you.

Ban the Box laws show no signs of slowing down, despite reported “unintended consequences.” These laws help people with criminal convictions get hired by removing questions about criminal history from job applications.

St. Louis, Missouri recently passed an ordinance preventing private employers from basing hiring or promoting decisions on an applicant’s criminal history. The new law goes into effect next January. A similar ban on employers in the public sector has been in place since 2014. St. Louis is the third Missouri city to enact a Ban the Box law following Kansas City and Columbia.

In Maryland, a new Ban the Box law is in effect but not without controversy. The state’s General Assembly recently passed a bill that would make it illegal for employers with 15 or more employees to make applicants disclose their criminal history before their first interview. Governor Larry Hogan vetoed it. The General Assembly then overrode that veto and now the law is up and running.

Supporters of these laws say they help get ex-offenders back to work, while opponents complain the restrictions waste employers’ time and money, among other issues.

The Professional Background Screening Association, an international accrediting organization for background screeners, is pushing for more research about these laws.

“We remain concerned that the current framework of fragmented and varying legislation at the state and local levels is not ideal. And we are also concerned about recent studies that initially find greater racial discrimination in hiring after “Ban the Box” legislation.”
–PBSA Policy Position