As I sat down to write this, Hurricane Matthew was preparing to pummel South Florida. Now that the storm has passed, Team Rubicon is preparing its legions of retired military to go into the hardest hit areas the moment it is safe to do so. If you’ve never heard of Team Rubicon, you’re not alone. I only discovered them at this year’s NAPBS conference. But I was so impressed that I wanted to tell our readers about them -- and what better time as deals with the aftermath of one of nature’s most brutal assaults?

Team Rubicon is the brain-child of two Marines, Jake Wood and William McNulty. As they watched news reports about a 7.0 magnitude earthquake levelling Port-au-Prince, Haiti, they realized they had the skills to really help. They gathered six other veterans and first responders and got themselves to the heart of the devastation. This small team traveled to areas that other aid organizations deemed “too dangerous” and focused their attention on those often overlooked in such disaster zones.

That was in January of 2010. In six years Team Rubicon has grown to 40,000. Of those, 80 percent are veterans. Not only does Team Rubicon help the victims of disasters, but they offer highly-trained veterans the chance to use the skills they honed during their service.

So how does this connect with background screening?

I spoke with David Burke, Director of Field Operations about this. He told me their need for solid background screening is two-fold. “As a disaster response organization helping people on one of their worst days, we owe it to disaster survivors to do everything we can to ensure we aren't introducing any additional risk,” said Burke. “In addition to that, we owe our volunteers a safe environment when they're putting their lives on hold to help others.” During a presentation at the NAPBS annual conference, Burke told the crowd of screeners that their work helped Team Rubicon grow into a true force for good.

As you read this, there are at least four recon teams on the ground helping people in Florida, South Carolina and Georgia. Others are waiting for the flood waters to recede in North Carolina.

As part of the background screening community, EBI is proud to have contributed to this organization. If you are interested in learning more, please check out the Team Rubicon website, and see how you can help them pull people out of their darkest days. 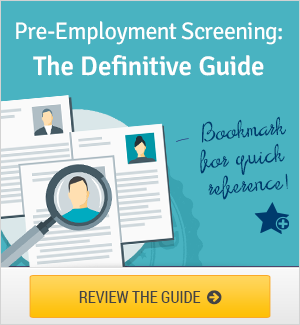