They are consistently listed as one of the best employers in the country, but Wegman’s Food Markets is now facing a federal class action complaint. Workers who filed the suit claim the popular grocery chain requires prospective employees to sign documents that contain a release of liability while omitting a clear disclosure that background checks will be conducted. The complaint also says the company doesn’t let applicants know they can get a copy of the report. Both of the named plaintiffs are currently employed by Wegmans, but claim they were “subject to a significant invasion of privacy that could jeopardize their personal reputation as well as financial well-being.” The possible class could number in the tens of thousands. The complaint also seeks punitive damages.

Related: The FCRA & Background Checks: What Employers Should Know

The Department of Justice has arrested a Pakistani businessman accused of peddling fake diplomas and certifications. Umair Hamid, who is also known as “Shah Khan” or the “Shah,” bilked $140 million out of consumers. According to the complaint, Hamid’s company, Axact, got as many as 5,000 calls a day from people trying to contact the various “schools” they claimed to represent. Employees were instructed to give fictitious addresses for the schools and then continuously up-sell consumers on additional “accreditations” or “certifications,” that carried a fake seal and signature from the Secretary of State or other government officials. Hamid is charged with one count of conspiracy to commit wire fraud, two counts of wire fraud and one count of aggravated identity theft.

Switzerland has always held its own when it comes to protecting personal data exchanges with the United States. When the rest of Europe operated under the Safe Harbor agreement, the Swiss had their own version. Now they have created a Swiss-US Privacy Shield agreement which applies the same extended protections as the EU agreement. The new framework goes beyond Safe Harbor to more fully protect data transfers. As with the European agreement, the new plan requires arbitration for disputes. There will also be an ombudsperson with the US State Department to manage questions from people living in Switzerland. American companies must apply for certification and be able to prove that they have adequate data protection standards in order to gain approval.

The Washington D.C. Council unanimously passed the “Fair Credit in Employment Amendment Act” to prevent most employers from using information from credit reports when making hiring decisions. According to the council, credit history is rarely, if ever, relevant to the hiring process. The law must still be approved by the mayor and then be submitted to Congress for review. The process is expected to be completed by spring of this year. 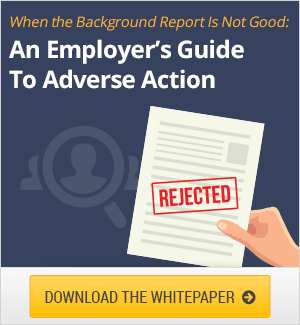