According to the 2017 Liberty Mutual Workplace Safety Index, workplace injuries cost employers $59.87 billion per year. When you break it down, that’s more than a billion dollars every week to treat everything from overexertion to slips and falls. The leading causes of injures are tied to the handling of heavy objects. These injuries impact both the employee and the employer. The employees experience physical, emotional and financial effects of the injury, while the employers face the direct costs of taking care of the employee, as well as the indirect costs of lost productivity and quality disruptions. According to the people who conducted the survey, knowledge is power. While it’s impossible to prevent every single accident, they say by knowing the risk of these injuries, employers can take appropriate steps to protect their workforce.

Changes Could be Coming to DOT Drug Testing Regulations

Half a dozen of the nation’s largest trucking companies have petitioned the Federal Motor Carrier Safety Administration (FMCSA) for a waiver that would allow them to use hair testing instead of urinalysis to drug test their drivers. Regulations require the use of urine testing, but all six employers have added hair testing on top of the requirements because they believe it gives a more complete picture of substance abuse. The employers say using multiple methods of testing is redundant and costly, and since they find hair analysis to be more effective they hope to get permission to make the change.

Additionally, the Department of Transportation (DOT) is proposing a change to its drug testing program. The revision would add four opioids to the current drug testing panel. The Department of Health and Human Services (HHS) has already expanded opioid testing for federal workers. The DOT change would bring it in line with the HHS guidelines. The HHS has also approved oral fluid testing as an alternative to urine testing. These changes go into effect on October 1, 2017. The DOT changes are open for comment until March 24th.

It is now illegal to ask job applicants in Los Angeles about their criminal history until a job offer is on the table. On January 22nd the city’s Fair Chance Initiative went into effect. It applies to all city contractors and private employers if they have ten employees or more. Some positions are exempt, like law enforcement and child care. According to a press release from the city, one in every four adults in California has an arrest or conviction record. The city hopes that if it is easier for ex-offenders to get a job, they will be less likely to offend again. Employers who fail to follow the law can face penalties and fines up to $2,000. 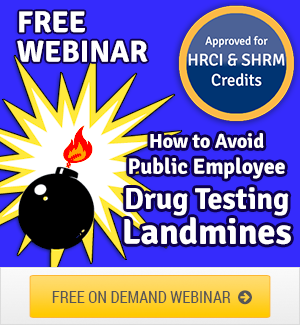