It is a good habit for companies of all sizes to do regular check-ups on their drug testing policies, because laws are changing very rapidly. One recent change is the new Reasonable Reporting Procedure rule from the U.S. Department of Labor’s Occupational Safety & Health Administration (OSHA). The new rule, §1904.35(b)(1)(iv), which OSHA will begin enforcing on December 1, 2016, could change the way you do post-incident drug testing.

Here is the concern: if an employer requires a drug test after every single work-related injury or accident, many people might not report incidents just to avoid taking the test. OSHA wants to make sure every incident is reported. To take away the fear of reporting, employers will now be required to have an explicit reason for conducting a post-accident drug test. A murky directive at best, this new rule has raised many questions from businesses of all sizes.

We recently hosted a webinar on how this change will affect employers. We have also put together a list of Frequently Asked Questions about §1904.35(b)(1)(iv).  We hope you find them helpful!

No, OSHA provides in its Preamble explanation of the regulation that “If any employer conducts drug testing to comply with the requirements of a state or federal law or regulation, the employer’s motive would not be retaliatory and §1904.35(b)(1)(iv) would not prohibit such testing.

Am I in violation of §1904.35(b)(1)(iv) if shippers require that all contractors’ and subcontractors’ employees submit to post-accident drug testing?

No, if the motivation behind the post-accident drug testing is to satisfy the shipper’s expectation that the employees handling its product are drug-free while performing this work, this should not be viewed by OSHA as a violation of the regulation because the employer’s motivation is not to discourage or deter the reporting of injuries or illnesses.

If the terms of a collective bargaining agreement require injuries to be reported “immediately,” will this violate §1904.35(b)(1)(iv)?

Can I conduct post-accident drug testing if an employee has apparently violated a safety rule that is so serious it could be the basis for immediate termination?

Yes, OSHA is not prohibiting post-accident drug testing when there is a “reasonable possibility” that an employee’s action caused or contributed to the resulting injury.

On its face, this would appear to be problematic if an employee were sent to a doctor for treatment that resulted from cases in which there is no reasonable belief that drug use by the reporting employee was a contributing factor to the reported injury or illness, such as a bee sting, a lightning strike or other act of God, an injury to an innocent bystander, or an illness such as a cumulative trauma disorder.

How will OSHA look at a drug-free workplace policy if a company is self-insured?

I work at a construction company.  Some of our contractors require us to have a drug-free workplace with post-incident drug testing.  Does this violate §1904.35(b)(1)(iv)?

No, OSHA’s focus is on whether the motivation for the post-accident drug testing is to discourage or deter the reporting of injuries or illnesses.  The motivation here is, in essence, that if your company wants to work for the contractor and be paid, you must implement a drug-free workplace.

If an employee is hit by a forklift, would a post-accident drug test be allowed if we think the employee was not aware of his surroundings?

If you have a reasonable suspicion that the injured employee was impaired, OSHA’s new regulation in no way prohibits such testing.  If your investigation determines that there was a “reasonable possibility” that drug use may have been a contributing factor in the injury, you may conduct a post-accident drug test.  Only if you determine that the injured employee was truly an innocent bystander would OSHA view such post-accident drug testing as potentially a violation of the regulation.

Will there be any differences between federal OSHA and state plan states on the new regulation?

Independent of a state drug-free workplace statute, what is OSHA’s position with respect to post-accident drug testing as a workers’ compensation defense?

Although OSHA wrote in the Preamble to the regulation that §4(b)(4) of the Occupational Safety and Health Act prohibits OSHA from affecting workers’ compensation laws, OSHA may not have been fully aware that a failed post-accident drug test may establish a full defense to a workers’ compensation claim.  Insurance carriers or self-insured employers may take the position that, in order to take advantage of this possible defense, they must conduct a post-accident drug test and preferably within the timeframe set up by the state’s statute to establish the presumption that an employee was drug-impaired at the time of the injury.  OSHA is struggling internally with this issue as it decides what guidance to give employers prior to the November 1, 2016, enforcement date.  The safest position to take at this point is to rely on the “no reasonable possibility” and “reasonable possibility” categories of cases to decide whether to conduct post-accident drug tests.  For those of you who wish to take a more aggressive stance, you will be asserting that you have a right under the workers’ compensation statutes to raise this defense, and that under Section 4(b)(4) of the OSH Act, §1904.35 cannot supersede or affect that right in any manner. 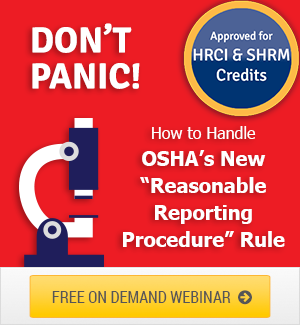