On May 12, 2015, the Federal Register published proposed guidelines from the Substance Abuse and Mental Health Services Administration (SAMHSA) for the inclusion of oral fluid specimens in the Mandatory Guidelines for Federal Workplace Drug Testing Programs. Sounds important – but what does it mean for Third Party Administrators (TPAs) and employers?

In a nutshell the proposal:

Some of the major provisions are:

The guidelines provide flexibility for federal agency workplace drug testing programs to address testing needs and remove the requirement to collect only a urine specimen, which has existed since the Guidelines were first published in 1988.

Federal agencies, MROs, and regulated industries using these Guidelines will continue to adhere to all other federal standards established for workplace drug testing programs.

As an employer or TPA who performs testing under one or more of the Department of Transportation (DOT) agencies, the proposed guidelines as currently constituted will initially apply to federal workplaces only. However, “some agencies such as the Department of Transportation (DOT) are required to follow these guidelines in developing drug testing programs for their regulated industries, whereas others, such as the Nuclear Regulatory Commission (NRC), use the guidelines as part of the regulatory basis for their federal drug testing programs.”

In addition, a dozen states currently defer to some form of the federal regulations for their drug testing procedural requirements. Sometimes they refer to “SAMHSA” and other times to “DOT” or “Part 40” in their state laws.  Some of these state laws are voluntary laws such Alaska, Arkansas, Georgia, Kentucky, Ohio and Tennessee. Others are industry specific such as West Virginia’s mining industry law or Illinois’ public works contractors law, and still others are mandatory laws such as Louisiana, Montana, Wyoming and the U.S. territory of Puerto Rico.  North Dakota is an example of state where its workers’ comp law refers to the SAMHSA guidelines and requires as least partial compliance in order to use a drug test result to move to deny or reduce benefits.

Why Oral Fluids?  Why Now?

The Substance Abuse and Mental Health Services Administration (SAMHSA) spent many months reviewing scientific data, hearing from scientists and other experts in the field, and debating the merits of oral fluid testing especially compared to urine testing. The accuracy, practicality, and legality of oral fluid testing were examined thoroughly.  SAMHSA’s conclusions, as featured in the Federal Register, highlight what are fast becoming the well-known advantages of oral fluid testing.

Related: What You Should Know About Lab-Based Oral Fluid Drug Testing

A major challenge to urine drug testing has been the proliferation of commercial products used to adulterate or substitute a donor’s urine specimen. Due to individual privacy rights, most urine collections are unobserved, allowing the opportunity to use such products. As the Department has established requirements and laboratories have developed procedures to control for adulterated and substituted specimens, manufacturers have developed new products to avoid detection. Current research indicates that some current substitution products are indistinguishable from human urine. The use of these products is expected to continue. Oral fluid collection will occur under observation, which should substantially lessen the risk of specimen substitution and adulteration and, unlike direct observed urine collections, the collector need not be the same gender as the donor.

The results of lab-based oral fluid testing may have greater relevance to understanding the effects of drug abuse and assessing an individual’s behavior, job performance, and safety risk than the results from urine testing. The presence of drugs in oral fluid is usually related to the amount of drugs in the bloodstream at the time of the sample collection:

The time course of drugs and metabolites differs between oral fluid and urine, resulting in some differences in analytes and detection times. Oral fluid tests generally are positive as soon as the drug is absorbed into the body. In contrast, urine tests that are based solely on detection of a metabolite are dependent upon the rate and extent of metabolite formation. Thus, oral fluid may permit more interpretative insight into recent drug use drug-induced effects that may be present shortly before or at the time the specimen is collected. A federal agency may select the specimen type for collection based on the circumstances of the test. For example, in situations where drug use at the work-site is suspected, the testing of oral fluid may show the presence of an active drug, which may indicate recent administration of the drug and be advantageous when assessing whether the drug contributed to an observed behavior.

The 60-day public comment period ended on July 12, 2015 and SAMHSA received hundreds of comments.  It will now take several months to review the comments and they may come back and ask for additional comments. No matter, there will be an implementation period of several months to give the industry time to prepare for the final guidelines and this includes labs qualifying under the federal regulations to perform lab-based oral fluid tests. Remember, the proposed guidelines will only apply to federal drug testing programs at first. Then, the DOT will need to create its own guidelines based on the allowance by SAMSHA. 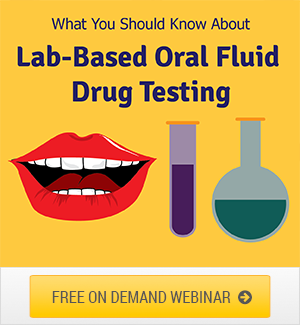 Special thanks to Nina French, our partner at Current Consulting Group.