Behind the Screen Part 4: Why Background Screening is a Necessity — Not a Luxury [Video + Transcript]

Behind the Screen Part 4: Why Background Screening is a Necessity — Not a Luxury [Video + Transcript]

We hope you have enjoyed our Behind the Screen series. We decided to pull back the curtain to show you how and why screeners do what we do. Screening has become a business necessity. If you hire people — especially people who will have contact with the public — thorough background screening has the potential to not only save your business, but it can honestly save lives.

In this final piece, we’d like to introduce you to Sue Weaver… a mother, a sister and a trusting customer who might still be with us today if an employer had conducted a simple background check. 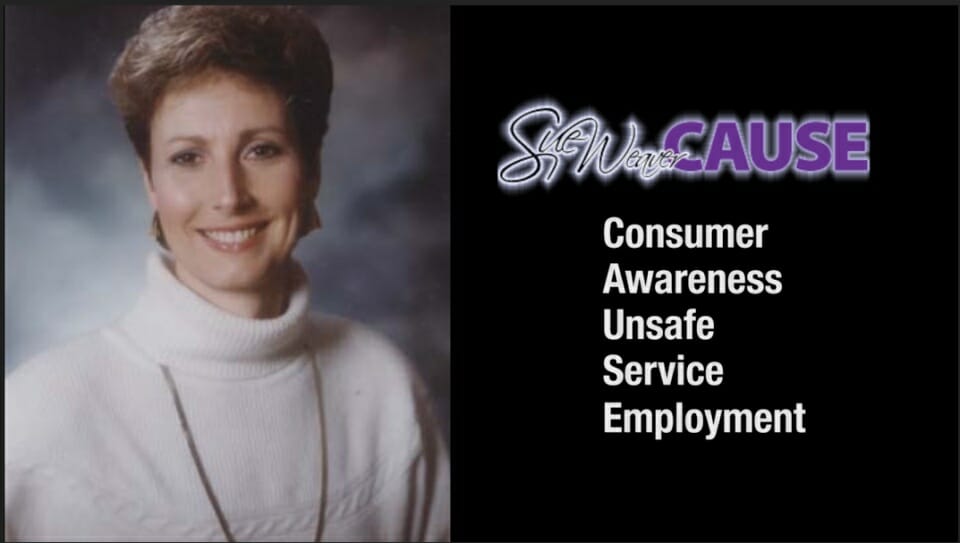 Lucia Bone: August 27 of 2001, Sue, my sister, was raped and murdered, and her home and her body were set on fire in attempt to destroy DNA evidence.

This horrifying story started six months earlier when Sue Weaver did something many of us have done: she hired a company to clean the air ducts in her home. She never could have imagined that the large, well-known business she called would have sub-contracted the job out and allowed two convicted felons so show up at her door.

Lucia Bone: One was a twice convicted rapist and the other was his supervisor who had done time for breaking and entering.

Both men wore uniforms with the big company’s name on them, but neither were hired by the store… and neither of them had a background check.

Lucia Bone: If they’d only done a criminal background check she might still be alive.

The convicted sex offender, Jeffery Alan Hefling, is the one who returned to the home. He had a long rap-sheet of violent sexual crimes and was actually on probation when he was sent on the original call. Hefling even reportedly admitted to spending 14 years in prison when he applied for the job… still no background check.

Lucia Bone: If you worked in their store they did criminal background checks, but they failed to make sure that the people they sent into your home were safe workers.

Hefling is now serving multiple life sentences in a Florida prison, and the family got a big settlement from the department store. But that wasn’t enough for Sue’s sister Lucia.

Lucia Bone: I had this passion — I had to do something in her memory. I actually made a promise to her at her memorial service that I would make a difference in her memory.

To fulfill that promise, Lucia created the Sue Weaver C.A.U.S.E., which stands for Consumer Awareness of Unsafe Service Employment. CAUSE works to get businesses that send workers into customers’ homes to adhere to safety and security standards that include annual background checks for all employees. This does not mean they are trying to keep people from re-entering the job market.

Lucia Bone: A/C repair is taught in prison, plumbing is taught in prison. That is still a good thing, but those workers, I believe, should not be sent to people’s homes. They need to work in commercial environments where they are supervised and where vulnerable people – especially women — are not at risk in their own home. We firmly believe, like everyone in the background screening industry, that everyone does have a right to work — just every job is not right for everyone.

Lucia urges everyone to ask some serious questions before allowing a service provider into your home:

Lucia Bone: Are they doing thorough screens? Are they screening EVERYBODY? Or are they just screening some of the people. Is it random? How often are they screening? You know, somebody could work with them for 10 years and have committed multiple crimes in that 10 years and if the employer doesn’t do reoccurring investigations they are not going to know that.

These answers might not be easy to come by in this day of call centers and national providers. So she recommends several ways for people to protect themselves…

Lucia Bone: One of the things we say is don’t be home alone — invite a friend over for coffee just so that one other adult is in the house with you. And your children are no protection at all.

If you can’t have someone in the house with you, call a friend and tell them the name of the company up and the name of the person doing the work. Have a back door unlocked so you can get out, and don’t follow the workers around the house.

Background screening is a relatively simple step employers can take to prevent such tragedies. Companies that do screen their workers can get CAUSE Certification. Look for the CAUSE symbol for extra piece of mind. For more information about the Sue Weaver CAUSE, visit www.sueweavercause.org.

Protect your workforce and your customers. Download this free guide for tips on selecting a background screening partner.

We hope this has given you a good sense of how important compliance is in your background screening program. For more “behind the screen” looks, visit Parts 1 – 3 of the series here:

Part 3 – Compliance in Background Screening: What is it, and Why Should I Care?