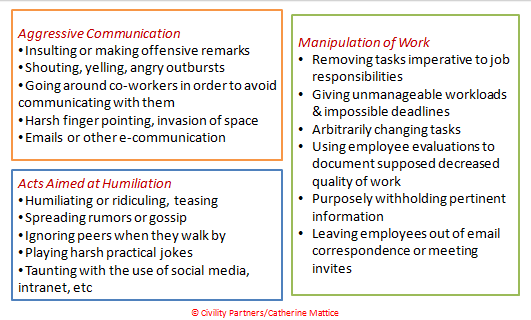 Bullying behaviors can be divided into three clear categories: aggressive communication, humiliation, and manipulation of work.

Discrimination occurs when an employee or manager treats one group of people less fairly than other groups of people because of a protected class, including race, religion, sex or gender, nationality, age, disability, genetics, or any other defining characteristic. Examples include consistently giving bonuses to males because they are male or to females because they are female, and not because of individual performance; not letting a person take the day off for a religious holiday; or taking responsibilities away from someone because she is pregnant.

Harassment is unwelcome conduct that is intimidating, hostile or abusive; interferes with an employee’s ability to work; or is a condition of continued employment. Examples include using racially derogatory words, telling inappropriate jokes, making offensive remarks about skin color or age, hanging offensive posters, expressing negative stereotypes and more.

Sexual harassment is unwelcome sexual advances, requests for sexual favors and other verbal or physical harassment of a sexual nature.

The Differences and Similarities between Harassment & Bullying 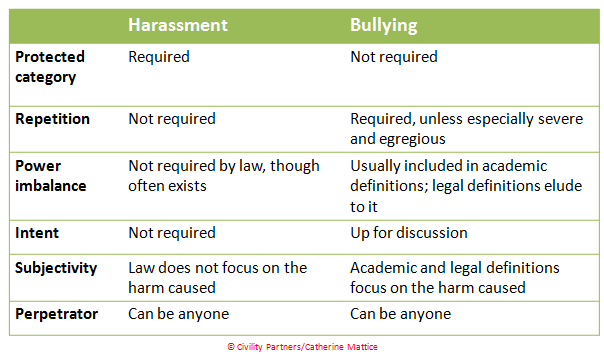 If a person is an equal-opportunity offender, and bullies a variety of people from a variety of categories, then it is not considered harassment and it is therefore legal.

Despite their legal differences, bullying and harassment often include relatively similar behaviors – and both are about power.

Currently there are four states that have a law about workplace bullying (the laws all refer to it as abusive conduct, but it is the same thing). Two of the laws require intention (Utah and California), one doesn’t mention it at all (Tennessee), and the fourth (Nevada) indicates bullying is illegal whether it “is intended to cause or actually causes harm.”

In the end, if the behavior is causing one or more people to feel uncomfortable, unhappy, stressed out, and more, then it should be stopped.

The Differences and Similarities Between Bullying & Violence

There are three levels of workplace violence. While Level 3 violence is what gets the media’s attention, Level 1 and 2 happen in workplaces every day.

In reviewing this list one can see that bullying and violence can easily overlap, however some differences do exist. Workplace violence is overt and physical, while bullying is insidious and manipulative. Perpetrators of workplace violence throw things, become visibly angry and make clear threats of violence. Bullies use workflow and communication to bully, such as bottlenecking information, overworking the target, giving impossible deadlines, and using performance evaluations to document alleged poor performance.

In rare cases bullying does indeed turn into violence because the target “goes postal” and gains retribution through violence against the bully. Most often, however, lost deep in their feelings of shame, helplessness and depression they commit suicide.

Sometimes the bully’s anger and frustration at the target get the best of him and he lashes out. I was an expert on a court case against a large retailer, for example, where the bully punched the target. The employer was sued because the target called the retailer’s risk management team when he could see the bully escalating, and risk management told the target to finish out his shift and then they would transfer him. Unfortunately during that shift the bully’s behavior escalated to violence.

In the end, negative behavior at work is on a spectrum, with incivility at one end, bullying somewhere in the middle, and violence at the other end.

2 thoughts on “A Closer Look: Workplace Bullying vs. Harassment”

September 6, 2016
Read it
Stop Bullies Early… Long Before they Enter the Workforce

You already know that bullying happens among children and teens in schools. The real unknown is how to stop it. […]